It's 10 minutes to midnight on a Thursday in Riyadh, the start of the Saudi weekend, and even though it's the middle of finals, Tahlia Street swarms with kids in Porsches and Ferraris looking for a good time. Throbbing bass beats back the syncopated rhythm of bleating car horns. The aim is not so much to get through the traffic as to draw attention to the young men in the driver's seats. They lounge in their leather thrones, AC on high and a forearm draped nonchalantly over a rolled-down window, luxury watch on display. Both peacocks and hunters, they have relaxed postures that belie eyes on alert for signs of prey in the passing cars: a foreign driver alone up front, and in the backseat, partially obscured by tinted windows rolled up tight, a woman's vague form.

I survey the scene from the backseat of my friend's SUV, confident in the relative anonymity of her darkened windows. The urgent honking of a nearby car breaks my reverie. A gleaming white Chrysler pulls up alongside. Inside, a young man, the starched and folded peaks of his red-and-white-checked headscarf pulled low in the Stetson-like style popular with hipsters, is waving for my attention. He swerves erratically as he attempts to steer with his knees, giving me a double thumbs-up and a broad grin. Then he raises a laminated placard stenciled with a phone number. After a few seconds, enough time for me to jot down the digits, he shouts across the lane, "Khalas? You got it?" As if to seal the deal, he licks his lips lasciviously, kisses his index finger with an exaggerated pout and blows it like Marilyn Monroe in my direction, then roars off. Welcome to the pickup, Saudi-style.

(See TIME's Lightbox with pictures of love and dating among Saudi Arabian youth.)

Salman must have been disappointed to get a phone call from an American journalist. When we meet at a popular café a few days later, he confesses that he received at least 10 calls that night and wasn't entirely sure which car had been mine. Ever the player, he tries to convince me that he "numbered" me, in local parlance, because I was "so beautiful." When I point out that a grandmother could have been behind that tinted window, he shrugs. "How else can I meet girls?" 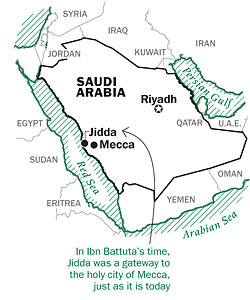 Over virgin mojitos, Salman describes to me a dating scene like no other. There are no movie theaters in Saudi Arabia, and no bars. Weddings are segregated, as are schools. In Saudi Arabia, where culture and religion conspire to prevent all unregulated contact between men and women, young singles resort to extreme methods in pursuit of romance.

In Riyadh, says Salman, numbering can be competitive. Preening males sometimes rent fancy cars in hopes of increasing their chances. "Girls don't give a damn if the boy is good-looking or nice," he complains. "They only care if he is rich." In the five years Salman has been numbering, he has managed to go on several dates and even had a girlfriend for a short while. But at 24, he's looking for something more serious. "Definitely romance," he says. "If I can find a nice, respectable girl this way, I wouldn't mind getting married."

Worlds Apart
"(I can't get no) satisfaction" was certainly not on the sound track to the Arab revolts. But it might very well have been their subtext, according to the well-known Middle East scholar Bernard Lewis, who argued in an interview with the Jerusalem Post that the uprisings were fueled in part by sexual frustration. "In the Muslim world, casual sex, Western-style, doesn't exist," Lewis said. "If a young man wants sex, there are only two possibilities — marriage and the brothel. You have these vast numbers of young men growing up without the money either for the brothel or the bride-price, with raging sexual desire. On the one hand, it can lead to the suicide bomber. On the other hand, sheer frustration."

The theory has drawn virulent rebuttals from some and slow nods of acceptance from others. Some, like Egyptian sexologist Heba Qotb, say the idea that men can't afford to get married is nonsense. Just look at the rate of early marriage in lower-class communities compared with that of the rich. "Late marriages," Qotb says, "are by choice." But Mahmood Takey, a 19-year-old Egyptian university student, says that without a job, he would hardly be considered a good catch. "A guy might have to wait until he is 30 before he gets a job, so of course he is frustrated. We were protesting because of corruption, injustice and unemployment, but absolutely sexual frustration was a part of it." Some men, he says, go to prostitutes, but not if they are religious.

Watch TIME's video "The Happy Muslims Who Confuse You."

Next The Sands, and Waters, of Time