No one who has visited Dubai would be surprised that some crafty property developer has devoted an entire mall to the great Ibn Battuta. Its hallways may be lined with the H&M shops and food courts familiar to any New Jersey mall rat, but the complex has been designed in the spirit of Ibn Battuta's historic travels, or so its managers tell us. In the China hall, a life-size model of a square-sailed Chinese junk hovers over a babbling fountain outside the multiplex. The India section boasts an ornately decorated fake elephant. A few steps away, an exhibition educates shoppers about the explorer's achievements. Panels detail his exploits along his long journey, and an abacus and other paraphernalia of his time sit in plastic cases. In the middle is a Starbucks. Is this any way to honor the most famous of Muslim explorers?

Actually, it is. The mall may be tacky, but it is also a symbol of the Islamic world's quest to reclaim the economic grandeur it had in Ibn Battuta's age. The display by the Starbucks reminds us of the wealth the Arab lands possessed when he traveled through them. A century after the explorer's death, however, the Muslims' economic power began to wane, Europe came to dominate the global economy and the Islamic world never closed the gap.

Arab nationalists are quick to blame European colonialism for holding the region back, but that's a symptom of economic decline, not the cause. Others have pointed fingers at Islam's prohibition of usury, which, critics claim, hampered the development of modern finance. It doesn't fly. Muhammad was a merchant, and he chose Mecca, a city enriched by the caravan trade, to be the spiritual center for his new faith. For centuries, Islamic countries were every bit as economically progressive as Christian Europe. 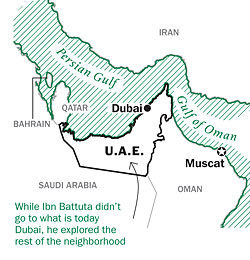 In his new book, The Long Divergence, economist Timur Kuran argues that Islamic law is to blame. Its strictures on business partnerships and inheritance made it difficult for the Islamic world to match the institutions of capitalism forged in the West. While the Europeans reshaped the global economy with joint-stock companies and modern banking networks, the Islamic world never did.

That's what makes Dubai so interesting. In many ways, the emirate is an attempt to re-create the vibrant, cosmopolitan trading entrepôts that were once such an important part of the Middle East's economy. This has meant introducing institutions that make modern economies work. In 2000, Dubai launched a stock market. The government has set up special economic zones (SEZs) in which foreign investors can easily start businesses, and built a top-class airport and superhighways. Underpinning everything is a tolerance for foreign religious and cultural practices that has permitted people of all stripes to live and work freely. The lanky blondes in tank tops emerging from the gym at the Ibn Battuta Mall are a testament to that. "Dubai has the type of institutions and regulations in place that have brought it very close to competing with Frankfurt or Singapore," says Ayman Khaleq, a partner at law firm Vinson & Elkins.

As a result, Dubai has become the primary trade and finance hub in the region. Up from the sand dunes has risen a forest of modern skyscrapers, including the 163-story Burj Khalifa, the tallest in the world. The swish Capital Club is bursting with well-dressed bankers and private-equity specialists from around the world. The hallways of the Ibn Battuta Mall are a cacophony of languages, skin tones and clothing styles.

See a brief history of Dubai.

Next In Pursuit of Romance