In February 1352, Ibn Battuta set off from the city of Sijilmasa at the edge of the Sahara to journey with a camel caravan to lands far to the south. The voyage across the desert was a grueling two-month ordeal through salt wastes and terrain "haunted by demons," yet it was a trek made by many then. Trade goods and Islam meant the Sahara was a crossroads, not a sandy oblivion. In almost every town he visited in the kingdom of Mali, Ibn Battuta was gifted calabashes and cucumbers by men who had made the hajj, the pilgrimage to Mecca. Upon seeing the Niger River, Ibn Battuta mistakenly concluded he was by the Nile. A crocodile to him looked "just like a small boat." 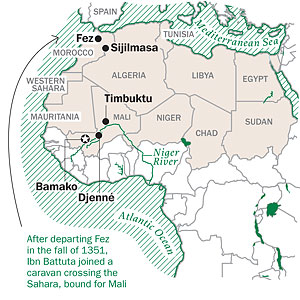 TIME photographer Dominic Nahr followed Ibn Battuta's path into sub-Saharan Africa. Starting at tourist-trodden Fez, he went to Sijilmasa, whose ruins, says Nahr, "feel forgotten." Through the desert and into Mali, Nahr passed the ancient mud town of Djenné, much the same now as it was in Ibn Battuta's time. At the shores of the Niger River, Nahr captured the panorama of an age-old festival, with fishermen sinking their nets en masse. Says Nahr: "My heart beat faster as I entered the waters." Ibn Battuta would have known the feeling.

Next The New Great Game