At the confluence of East and West stands a city at the mouth of the Ural River, which cleaves the Eurasian landmass into two continents. Atyrau was the first Russian settlement in modern-day Kazakhstan; it was a fort constantly imperiled by steppe nomads and marauding Cossacks. Yet there is almost nothing here for the modern traveler: no compelling historic sites, no exceptional landscapes, no quirky cultural traditions. Even the nearby Caspian Sea fails to provide respite — brackish marsh stretches for miles, the ideal breeding ground for the mosquitoes that swarm even during daylight. Touring the outskirts of the city, where Ibn Battuta once traded his horses for camels in the Golden Horde oasis of Saraichik, my eyes crave anything to break up the monotony of salt-stained scrubland. But the ruins of Saraichik offer only a few lumps of mud brick — and a human skull sitting on the Ural riverbank.

Desolate as this place may be, flights to Atyrau are invariably full. Swatting away clouds of mosquitoes at baggage claim with me are muscled Filipinos, sunburned Houston executives, unflappable Indians and scented Russians wearing fine shoes and watches. Atyrau may feel like the barren epicenter of Eurasia, but it is also the booming oil capital of a young, resource-rich nation. Because of the influx of oil money, rooms at the uninspired top hotel in town, with its thin walls and bountiful adult-TV programming, rent at Tokyo or London prices. New-model MercedesBenz and Land Cruisers purr amid the clattering Ladas and Skodas. A gated community of cream-colored California-style villas — each with a patch of lawn, a Weber grill and an American-made trash can — provides refuge for expat oil barons unimpressed with Atyrau's Soviet architecture. Although the Caspian is famous for its caviar, gastronomic civilization has arrived in another form: a TGI Friday's and a Baskin-Robbins.

(See pictures of the child tobacco farmers of Kazakhstan.)

Such are the totems of a new Central Asia. Islam as a political force once dominated this vast, forbidding land. But when Ibn Battuta (and Marco Polo before him) coursed through, no single imperium ruled. Eventually the Russians prevailed. By the 1920s, the godless Soviet Union had gobbled up Central Asia. Moscow's influence persisted even after the dissolution of the U.S.S.R., with the landlocked region dependent on Russian trade ties. The U.S. has since tried to undercut Russia by pouring money into the energy sector of Kazakhstan, the biggest and richest of the Central Asian republics. Relations between the U.S. and Kazakh leader Nursultan Nazarbayev have even taken on an opportunistic, Cold War — style friendliness, despite the strongman's indifference to Washington's lectures about democratic virtues. 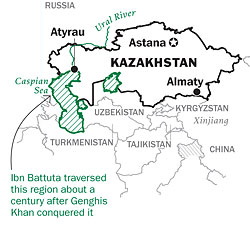 Enter Beijing. Where oil gushes in the developing world, the Chinese have a habit of appearing. Eager to fuel its voracious economic engine, Beijing has scoured the globe for untapped oil reserves and mineral deposits. Kazakhstan happens to be the world's largest uranium producer, and recent oil-field discoveries in the country's west are among the planet's biggest in more than two decades. The Middle Kingdom's power only increased after the 2009 financial crisis left Western firms temporarily less equipped to compete with the cash-rich Chinese. In that year alone, Beijing lavished $10 billion in financing on Kazakhstan, helping build roads, railways and telecommunications networks.

This spring, China Petroleum and Chemical Corp., or Sinopec, began work on a $1 billion expansion of the Atyrau oil refinery. Chinese firms now control roughly one-quarter of Kazakhstan's oil production. Some of it flows to China via a pipeline that gives Beijing a crucial alternative to the Strait of Malacca choke point through which most of its oil imports must pass. The pipeline, which is expected to carry 20 million tons of oil a year by 2013, stretches from western Kazakhstan and tunnels through the Tian Shan Mountains to Xinjiang, the fractious, Muslim-majority autonomous region in northwestern China.

A giant uranium deal and acquisition of a major natural gas field have also given China Inc. a bigger stake in Kazakhstan, a country the size of Western Europe. When Chinese President Hu Jintao visited Kazakhstan in June, he took with him $2.5 billion in investment and currency deals. This year, Kazakhstan's trade with China will likely surpass its trade with Russia; Hu has predicted trade levels will double within four years to $40 billion. "The whole of Kazakhstan has a population that's smaller than one of our big cities," says Liu Wei, a Sinopec employee in Atyrau, referring to the Central Asian nation's 16 million people. "But it has so many natural resources. What's the problem if we want to buy them and help make Kazakhstan rich?"

Next The Exodus from Bukhara