As I walked through winding alleyways into old Bukhara, other Jews were headed in the opposite direction. For centuries, the Jewish community had thrived in this Central Asian trading outpost in Uzbekistan. They lived much like their Muslim neighbors in adobe homes and walled compounds sheltering apricot trees and shaded pavilions. But by the time I visited in 2002, most of the Jews had already departed, some so quickly that they left many of their cherished possessions behind. Muslim families sold worn Hebrew prayer books on the street to tourists for a few dollars. At the synagogue, little more than a plain room in an old building, the few remaining Jews were desperate to get out as well — to Israel, to the U.S., anywhere they could find refuge.

How heartbreaking, I thought. An entire civilization was evaporating. No one knows with certainty when the Jews first arrived in Central Asia. One tradition has it that they came after the Persians freed the Israelites from exile in Babylonia more than 2,500 years ago. They had certainly been there long enough to develop their own special sort of Judaism and language, a dialect of Farsi called Bukharian. And then, in just a few years, they were gone. Alanna Cooper, an anthropologist who has studied the community, estimates that some 50,000 Bukharan Jews lived in Central Asia on the eve of the collapse of the Soviet Union; today, she believes, fewer than 1,000 remain.

The struggle between Zionists and Arabs over Israel has morphed into a wider religious conflict between Jews and Muslims. That has sparked a mass flight of Jews from the entire Islamic world. Over the past 60 years, hundreds of thousands of Jews have fled homelands in Muslim countries from Algeria to Iran. This exodus is a reversal of history. Though the Jews and Muslims had their moments of tension — dating back to the early days of the Prophet Muhammad in Medina — Jews generally experienced better treatment in Muslim lands than in Christian ones. The Crusaders slaughtered Jews; Muslim leaders like Saladin protected them. Jews aided the 8th century Muslim conquest of Spain to end persecution by the Christian Visigoths. When Ferdinand and Isabella expelled the Jews in 1492, many found safety in Islamic lands. 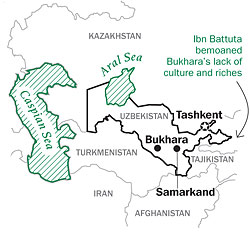 In modern Central Asia, Muslims and Jews were bound together by a common enemy — the Soviets, who tried to stamp out both religions. But that changed in 1991 with the independence of Uzbekistan. In a nationalist frenzy, the new government propagated the Uzbek language and mosques proliferated, making the Jews feel like foreigners in their own country. Worse still, their longtime Muslim neighbors turned on them. "People started saying: 'Go back to where you came from. You don't belong here,'" says Tamara Benjamin, formerly of Tashkent.

Benjamin, together with thousands of other Bukharan Jews, relocated to the borough of Queens in New York City, where they have tried to re-create their old life. Bakeries sell the crusty, spongy, round non bread omnipresent on the streets of Samarkand. Kosher eateries dish out kebabs and lamb noodle soup. In the synagogues rabbis deliver their sermons in Bukharian. Yet the melting pot that is America dramatically dilutes, over the generations, what Bukharan tradition might be left.

Aron Aronov, a 73-year-old from Tashkent, wants to stop that trend. Inside a local yeshiva, or traditional Jewish school, Aronov opened a museum to preserve his culture. The cramped rooms are cluttered with yellowed photographs, old clothing and crumbling books — like memories stashed in a grandfather's attic. At home, Aronov has converted his Queens backyard into a replica of a Bukharan garden. He waters his freshly planted apricot trees and serves tea in a pavilion. More than 20 years after moving to the U.S., he still longs for the winding lanes and adobe houses of his youth. Will he ever go back? Says Aronov, sadness in his voice: "It's too late."

See the top 10 things you didn't know about Hanukkah.

Next History on a Plate