Thus "Kong" was born from Cooper-Schoedsack's own experience as documentary filmmakers, Willis O'Brien's test reels, a fairy tale plot line conceived by Hollywood veteran James Creelman and Schoedsack spouse Ruth Rose, and a naïve '30s view of the great ape as nature's ultimate killing machine. Like the dragons, the displaced ape would die in the city; even better, he would die on the just-completed Empire State Building, the ultimate expression of human technical achievement, and he would be killed by airplanes, the ultimate engine of destruction. Cooper and Schoedsack appear in "King Kong" — a cameo as pilot and gunner in one of the biplanes, pumping lead into their own creation.

In her charming autobiography, "On the Other Hand," Fay Wray says Cooper handled the more technical sequences — Fay screaming from the top of a tree as Kong and the Tyrannosaur battle in the background, for instance — while Schoedsack helmed the human-to-human passages. She remembers Cooper telling her to "Scream! Scream for your life, Fay!" just as Denham instructs Ann in the memorable scene on shipboard. He later bragged to a friend at the Brown Derby, "I just finished making Fay Wray work for 22 hours!"

Cooper had a motto, his "three D's": keep it distant, difficult and dangerous. He and Schoedsack forged a style of storytelling that simply doesn't exist anymore, a style that is hard to define yet quite distinct. It is evident in all of all their productions together. What distinguishes the style? For one thing, speed. Denham meets Ann Darrow; seconds later she is on her way to Skull Island. Kong escapes in New York; within five minutes Ann is in his hand as he climbs the Empire State Building. Her love affair with Driscoll is sketched out in a few lines. There is not a wasted frame and everything advances the narrative.

The fast pace of "Kong" reminds me of other films from the '30s that have the same breakneck speed, most particularly the work of W. S. Van Dyke in "Tarzan and His Mate," "Trader Horn" and my favorite, "San Francisco." Certainly influenced by Cooper-Schoedsack (some of their jungle footage turns up in both "Horn" and "Tarzan"), Van Dyke sets up the plot and gets us involved in the characters with an economy that is unimaginable today.

The last major contributor to "Kong" was the first man mentioned in this article: the first great artist of stop-frame animation, Willis O'Brien. In some ways Kong is just a remake of his earlier silent film "The Lost World": Professor Challenger's expedition finds dinosaurs in Africa and transports them to London with predictable results. Though Kong has some superficial similarities to "Lost World," it is a much better picture.

It is not overstating the case to call O'Brien a genius. Stop-frame animation is not only technically difficult, but creatively challenging. Any competent animation artist can get a clay figure moving around a set ("Celebrity Deathmatch" comes to mind), but it takes an artist of unusual talent to breathe life into these play-dolls. 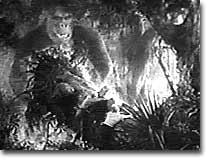 The way Kong moves defines his character as much as anything he does, and the expressions playing across his face make him real. The way his nose wrinkles, and then the way his head retreats, when he holds the shreds of Ann's dress up for a close inspection. The way he erupts in rage, an animal snarl taking over his face, when he sees that Ann is escaping down the cliff (and with another male, at that!). The way he gently lowers her to the ledge atop the Empire State when he realizes he is weakening.

To be honest, the style of Kong is crude; the digital techniques of today are so much more sophisticated than the gross, mechanical movement of the steel-armatured puppets. The principal emotional modes are comedic, bathetic or scary. And "Kong" isn't scary, at least not to a modern audience, and the emotional moments are far too sentimental for modern tastes. Yet it works! Somehow, like Karloff with his brilliant miming in the James Whale Frankenstein pictures, O'Brien makes Kong into something not just alive, but worthy of our sympathy. 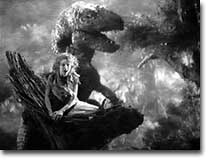 No one else in cinema ever imbued rubber and fur with the lifelike feel O'Brien achieved in "King Kong." The only other man who came close was Ray Harryhausen. But as Paul Jensen notes, "[Harryhausen] worked hard to make good, imaginative pictures, but he never worked with a person who could take him further than he might go alone, as Merian C. Cooper did for Willis O'Brien." Harryhausen was the aging animator's apprentice on his last great picture, "Mighty Joe Young," for which O'Brien won the Oscar. One of the lessons he learned was not to do things with prohibitively big budgets ("Young" was a bomb at the box office). Consequently, while Harryhausen's career flourished, O'Brien's was full of unfunded ideas and abandoned projects. O'Brien's entry in the Internet Movie Database lists only six more films between his work on Kong and his death in 1962.

Later in life, high school now, I got a dream job in a fabulous revival house called Studio 35 (3055 Indianola Avenue) operated by a guy named Frank Marzetti. It was right in the middle of the only thing that wasn't new about the '60s: its rediscovery of the American cinematic past. I saw "The Big Sleep" and "The Maltese Falcon" for the first time on the big screen, on a double bill. I saw "Coconuts" and "Night at the Opera" and "Day at the Races" all on the same evening. I saw "Shadow of a Doubt" and "Night of the Hunter" and "Beat the Devil" and "It Happened One Night."

Frank would get the Village Voice out of New York, see what the Thalia was running, and make sure it played the Studio, so in addition to the American canon I saw "The 400 Blows" and "Grand Illusion" and "Bicycle Thief" and "Rules of the Game," and the newer stuff like "Satyricon." I even saw "La Dolce Vita" — and believe me, this was unusual fare in Columbus, Ohio, in the waning days of the '60s.

It was the best education in films a young man could get, and not a bad introduction to popcorn making, carbon-arc projection, and trick double-ticketing, either. (You'll need to find a small-time exhibitor from the days before flat rate rentals to explain that lost art to you!)

So I would haul it out — a creaking projector and these two cans of 16mm film — and take it on the road. I took it to my high school. For three days straight I ran "King Kong" in segments to six different English classes. I ran it at home, out in the back yard, projected onto a sheet on the back of the house while we sat on blankets in the grass. And I ran it in the basement for my friends, including the 16-year-old with whom I was desperately in love, while we held hands in the dark, only separating so I could put on the second reel. I tried hard not to let her see me cry, which I always did, when Kong hit the pavement of 34th and Fifth. 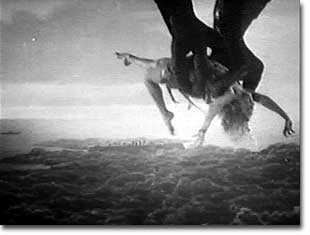 Kong dies, so it's sad, but the world he brought with him was still better than the one I was in: made-up, perfect, grand, a matte painting of a path up a vine-covered cliff, dramatically lit by a shaft of sunlight through a break in the clouds. I could interpose it between myself and the depressed new-suburban vista that surrounded me.

Now that I'm older I don't need it so badly. I have lots of trees around my house, and nobody's thrown a punch at me since high school. Still, I always have a version of "Kong" around. It's an emotional insurance policy, a government bond I can cash out when things get to be too much. People do funny things when they're hurting; some of them drink, some of them cry, some of them just go to bed. The night my grandmother died my grandpa sat alone in his living room and read "Treasure Island" from cover to cover. If it had been me, I'd have been watching "King Kong."

For the best discussion of O'Brien, Harryhausen and "King Kong" still in print, check out:

"The Men Who Made the Monsters," Paul M. Jensen
New York: Twayne Publishers, 1996

Or look around for a used copy of these out-of-print titles:

For a detailed history of the Hayes office and Hollywood censorship, see:

The best fan site on "Kong" with superlative digressions on Harryhausen and O'Brien: http://www.aboyd.com/kong/index.html

The ultimate film resource (and a perfect example of what the Net should be): The Internet Movie Database at http://us.imdb.com/

And for those who can't get enough, check out Obsessionist No. 1, Phil Spector and the Ecstatic Moment on Time.com