What is it about "King Kong"? Kind of ridiculous on a plot level, isn't it? Expedition sails to uncharted island to make an adventure documentary; they bring along a blonde, Ann Darrow (Fay Wray), for "love interest." Natives on island make sacrifices to local god, figure the blonde would work better than one of the local maidens. Kidnap blonde, tie her up on altar on other side of huge wall, call on the god. God turns out to be giant ape who feels immediate love interest and grabs the blonde. Expedition pursues them into the jungle, where all die from various prehistoric perils (giant spiders, for instance) except for Jack (Bruce Cabot), blonde's boyfriend, and Denham (Robert Armstrong), the filmmaker. Jack continues pursuit; Denham heads back for help.

Finally Jack rescues the blonde, Kong in hot pursuit. They make it back through the giant gate where Denham waits with something called "gas bombs." Kong is KO'd, brought back to NYC where he is put on display. Photographers stir him up: "Stop! He thinks you're attacking the girl!" He breaks through his chains in a fearsome rage, trashes an elevated subway train, eats a man in a pin-stripe suit, and plucks a young woman right out of her bed. She's no Ann, though, and he drops her — literally. Somehow he finds Ann and takes her to the top of the Empire State Building. He puts her down and biplanes attack with lethal machine guns. He falls; Ann and Jack are reunited.

Cop to Denham, standing by Kong's corpse on 34th Street: "Well Denham, the airplanes got him." "Ah no," says Denham, hands in pockets, "it wasn't the airplanes. It was beauty killed the beast." Fade up "Kong" theme; The End.

Is there anyone out there who doesn't know all this? Isn't "Kong" as much a part of our culture as "The Wizard of Oz"? It was a much bigger hit than "Oz" when it opened on March 2, 1933, filling the two largest theaters in New York to capacity — the Roxy and Radio City Music Hall, with 10,000 seats between them — for 10 shows daily. In L.A. it broke box-office records at Sid Graumann's Chinese (where 13-year-old Ray Harryhausen saw it with his aunt). It was a hit in five rereleases as well, especially in 1952, when it helped to inspire the radiation-monster cycle that began a year later with "Beast From 20,000 Fathoms."

Kong was made for $650,000, a significant figure at the time, high enough to require special pleading from Selznick with East Coast stockholders. It brought in $5,000,000 on the first release alone. And those were mid-Depression dollars. Think of it as the "Star Wars" of the '30s — a blockbuster. Boffo at the B.O., as Variety would put it.

Still, I suppose by now the run is over; the slow death of the revival house has insured that you won't see "Kong" at the movies. There's still video, of course: "Kong" is easily available for rental or sale, there are rumours of a notoriously bad German DVD, and it shows up on AMC and TCM fairly often (last Tuesday, in fact). I'm guessing the Turner library (a part of AOL Time Warner, by the way, which owns all the old RKO releases) is preparing a DVD for U.S. release. (There was also an excellent Criterion Collection laser disk. Do you still have your laser disk player?)

Fortunately the version available on VHS and cable is the reconstituted original release print, without the cuts made for the 1938 rerelease. Kong's premiere in '33 made it a "pre-Code" film. The Hollywood Production Code, administered by the Hayes Office, was a self-imposed set of rules devised by the studios after the 1915 Supreme Court declaration that movies were "capable of evil, having power for it." The ruling made prior censorship by local government boards legal; expensive prints could — and would — be seized by local sheriffs and police departments.

In the following decade the outraged (and self-serving) newspaper reactions to the Fatty Arbuckle scandal, the death of Wallace Reid and the murder of William Desmond Taylor prompted fears in Hollywood that there would be more legislation, and setting up the Hayes office was an attempt to make sure that didn't happen.

For some reason, the advent of the talkies in 1929 threatened the guardians of American morality more than anything that had gone before, and pressure on the studios began to build until Code compliance became standard in 1934. The self-censorship mechanism was in place, and it dominated major U.S. releases without exception until 1953, when Otto Preminger used the word "virgin" in "The Moon Is Blue" and got away with it. Even David O. Selznick had to beg Hayes Office approval for the final "I don't give a damn" in "Gone With the Wind." The Code insured that all married couples used twin beds, that no kiss lasted longer than 10 seconds, and that crime never paid. (Network television seems to be the last venue where any of the original code still applies, the only place left on earth, in fact, where cops don't use the f-word.)

"Kong" lost about five minutes in order the pass the Code: the shot of him eating the man in the suit; other scenes where he chews on villagers and then brutally stomps them into the ground; and the whole sequence with the wrong woman pulled out of her bed. Also missing was the tail end of the scene where he pulls off Ann's clothes (and smells them, wrinkling his nose). Unfortunately, when the movie was rebuilt in 1969, the restored footage came from 16mm prints; there are obvious shifts in density and contrast in consequence. Here are some screen captures from the missing scenes:

The cumulative impact of the cuts is to make the King a much more amiable guy, less savage. I was surprised by this when I saw the rebuilt version in a limited theatrical run in 1969. The Kong of my youth was perhaps easier to sympathize with.

And sympathize I did; I was invariably moved by the flick, no matter how many times I'd seen it, and I always choked up at the same place — Kong's plunge from the Empire State. What gets me so much? Why am I affected? 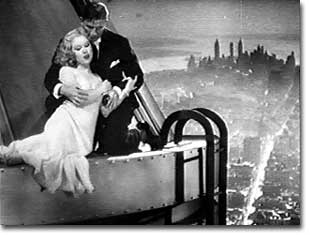 I can only guess. The first thing I think about is the sheer beauty of the film, these highly detailed scenes that could never exist. As in the paintings of Dali, there is such a high level of craft at work, and also like Dali, the depicted objects could not exist, they defy physics. (Kong's muscles couldn't support the mass of his skeletal structure — or was it that his bones couldn't support his musculature? I can't remember which, but it's a major health issue in big monster circles.) The matte paintings, which I believe to be the uncredited work of Henri Hillinck, fill the frames of "Kong" and are the primary source of the fabulous vistas. 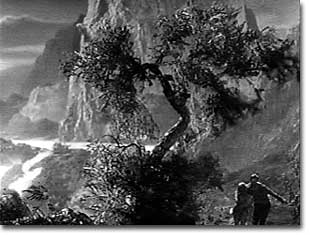 There is something so otherworldly about these frames. They evoke the hyper-realist, pop illustration style of Maxfield Parrish and the uneasy, richly detailed backgrounds of da Vinci, yet they are photographs, with the texture and versimilitude that implies. Like shots of the long climb up the "escarpment" in the Johnny Weismuller Tarzan pictures from the same period, they immediately summon the worlds of Edgar Rice Burroughs and H. Rider Haggard. This is fantasy on a grand scale.

And it isn't just the look that makes this happen. There is also the music. Max Steiner, who wrote it, was a consummate Hollywood professional with credits stretching from "Gone With the Wind" to "Casablanca," from "The Big Sleep" to "Treasure of the Sierra Madre." There's no space to do him justice here; suffice it to say that his score for "Kong" is unprecedented.

Watching what Steiner did in "Kong" expanded my appreciation of all film scores, an appreciation I've never lost, and for which I am appropriately grateful. The rich scoring of Kong set me up for Bernard Herrmann a couple years later, when I finally caught up with "Citizen Kane."

Though complete scores had been written for silent films (as when an orchestra traveled with "Birth of a Nation"), they were usually a pastiche: the "Ride of the Valkryies" for the cavalry charge, "Swan Lake" for the kiss. The early sound era was no different; if anything, early talkie scores were less sophisticated than the full orchestral scores that accompanied some A-level silents.

Steiner was one of the artists who changed all that. He wrote a very long, entirely original, and completely integrated score for "Kong." There were themes for all the principals, intriguing orchestrations, and passages of great melodic or rhythmic sophistication. I am listening to one playing in my brain as I write this, and have been humming these melodies for over 30 years.

Aside from the look and the music of "Kong," of course, are the shaping hands of producer-director Merian C. Cooper and his co-director Ernest Schoedsack. Cooper had been among other things a sailor, a newspaperman, and a combat aviator; while in Poland after his escape from a Bolshevik labor camp, he met veteran newsreel cameraman Schoedsack.

According to Fay Wray the characters of Denham and Driscoll are modeled on Cooper and Schoedsack, who as a documentary filmmakers would go anywhere for a picture. They scored big with "Grass" in 1925, its setting the wind-swept plains of Persia. They followed-up with the Siamese jungle picture "Chang" in 1927, their first foray into spectacle: a climactic (and staged) elephant charge decimates a native village. The more sensational scenes in the picture were projected in "Magnascope", a process which enlarged the size of the image to Imax proportions. (Cooper and Schoedsack went out the way they came in: their last picture together was the 1952 tech spectacle "This Is Cinerama".)

"Kong" was Cooper's idea, although English mystery novelist Edgar Wallace gets a co-credit (he died of pnuemonia only three days into the script). In 1926 adventurer W. Douglas Burden traveled to a remote and legendary island in the South Seas at the behest of New York's Museum of Natural History to bring back a dragon. Two dragons, to be exact: Komodo dragons, 300 pounds heavy and 10 feet long, lizards that ended up in the Bronx Zoo and quickly pined away in the forbidding environs of New York. Burden told the story to his friend Cooper and a lightbulb appeared.

It's hard to believe, but his first thought was to transport a film crew and a great ape to Komodo Island and somehow get the ape to fight a lizard on film. There were some logistical problems (I wonder what they could have been?) and the plan never got off the ground. A couple years later Cooper was asked by newly appointed RKO studio head David O. Selznick to compile an inventory of every piece of film in the library. Cooper came across some sequences from an unfinished stop-action animation film called "Creation," the pet project of animator Willis O'Brien (more on him in a moment). As soon as Cooper saw the footage, he realized that Komodo Island could be created in-house for a fraction of the cost of an expedition.