I found out about "King Kong" from "Famous Monsters of Filmland." This was a magazine founded in 1958 by a guy named Forrest J. Ackerman, a true enthusiast of horror films (nowadays he'd be putting up an obsessive web site with hundreds of pages). If there were people screaming, "Famous Monsters" covered it: the latest Vincent Price film, Japanese monster flicks, any flavor of Dracula or Frankenstein. There were stories on makeup, on directors, on actors, on special effects techniques. There was the "Fangmail" and the monthly "Horrorscope." The back of the book sold items like magic kits, X-ray glasses and Tor Johnson masks (the wrestler turned actor courtesy of Ed Wood and "Plan 9 From Outer Space"). It was fabulous. I was an instant fan.

I had to make a pilgrimage to a drugstore on the West Side of Columbus to get the magazine. The drugstore at the end of my street where I bought my copies of "The Fantastic Four," "Nick Fury," and "Spider-man" didn't carry it. We were up on the West Side every weekend anyway, visiting my aunt and my grandparents; it was a short walk and a chance to get away from the adults for a while. My brother Pat and I hit the road.

Just across the street from the drugstore, we are surrounded by four guys in T-shirts and jeans; one even had a motorcycle jacket. Greasers! We couldn't even get away from these guys on the West Side, where the old people lived.

One guy straight-armed me in the shoulder. "Where you goin'?"

I hesitated; what did he want me to say? What wouldn't get me in trouble? "Drugstore," I said, barely getting the word out.

"Pussy!" the guy says, and punches my brother in the side of the head. I froze with my mouth open. Pat held his hand to the side of his head. We all just stood there for a moment, then they moved away. It was a perfect Columbus moment, the kind combat troops describe — long days of boredom punctuated by a quick flash of terror. 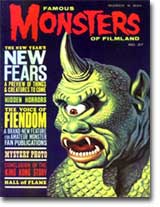 Surviving the greaser attack made us giddy, the way we always were when we walked out of a jam. We made it the rest of the way to the drugstore and got that month's "Famous Monsters." Here's what the cover looked like; this issue recently sold on eBay for $45. (What the world needs now — yet another robust collector's niche...)

Inside "Famous Monsters of Filmland" #27 was Part 2 of an article on the making of "King Kong." I mean, I'd heard of it, of course, but I really had no idea of what I had been missing. Keep in mind that I'd been a stop-frame fan for years, and here was this article with these fantastic photos that implied that I had somehow missed the greatest stop-frame flick of them all. It was the movie that had inspired Harryhausen!

God, what pictures! Kong fighting what looks like a T. rex; Kong tearing apart a pterodactyl with his bare hands; Kong outside a giant gate as hundreds of villagers run toward the camera; Kong on the Empire State Building defying the planes that are coming to kill him. There were pictures of the giant mechanical head and hand of Kong. There was an illustration showing a section of the Empire State sloped like a ski ramp, with a man in a gorilla suit climbing while photographed from directly above. The graphic had been taken from a movie magazine that was getting out some prerelease publicity; like the facts in most movie magazines, it was incorrect. There was never a man in an ape suit in any part of the film, as "Famous Monsters" pointed out. (That technique had to wait for "Godzilla.")

Most interesting of all to a child already obsessed by the obscure and the elusive, there were hints in the article that some sequences had just been too scary to include in the finished film, most notably something about giant spiders at the bottom of a ravine. There was actually a shot of the spiders, which indeed do not appear in the release version of "Kong." (Later I heard the story: producer-director Merian C. Cooper had cut the sequence after the first preview. It seemed to him that it had stopped the picture cold.) Like Welles' cut of "Ambersons" or the original release print of Cukor's "A Star Is Born," the spider sequence has passed into the Missing Cinema Hall of Fame. It is still the subject of Internet rumours 78 years after it was first reported missing; the web fanatics insist it will appear on the long-delayed American DVD.

A passion was born. I HAD TO SEE THIS MOVIE!

This was back in a time when it was really hard to pick up on older films; it either showed up on local TV or it didn't. There were no revival houses in Columbus at the time; VHS hadn't been invented. My wife once told me that as a child she dreamed of being President; not because of the power, the fame, or the capacity for changing the world, but rather because the President had his own screening room and could watch any movie he wanted. I knew how she felt.

So I waited — and I waited. I don't know for how long, but it must have been at least a year or two. The boring school hours came and went, the casual brutality continued, and my unhappy childhood days played themselves out like the least imaginative, longest-running soap opera on television.

Finallly, the light broke through the clouds. I was into my weekly perusal of the stone tablets handed down from Sinai, TV Guide, when I got the news. "Kong" was scheduled! Unfortunately, it was going to be on very, very late — 11:30, right after the news, the spot where Channel 10 ran a movie every night of the week. Late night was a problem; I was at an age when I was still negotiating with my folks to see "The Man from U.N.C.L.E.," which started at 9.

Fortunately it was summertime, school wasn't an issue, and I was able to reach a compromise with the parents: I would go to bed early, get all the hours of sleep a growing boy needed, and then get up in time for the movie by setting my alarm clock. Basically my parents sympathized, so it wasn't that hard to strike a deal; my father was as movie-mad as myself, sometimes taking us to two or three double features in a single week. (I used to feel sorry for other kids when I talked about Clint Eastwood's spaghetti Westerns or "Dr. No" or "North by Northwest" and find that they didn't have a clue what I was talking about. No wonder they were so ready to kick my ass.)

Mom didn't give much trouble, either; the only movies that bothered her were "Psycho," where she was right; "Dr. Strangelove," where she was wrong; and "Goldfinger," where she was sitting in the next seat ready to throw herself between me and the screen.

I was so excited I don't know how I got to sleep. But I did, and by six o'clock, too. Kids are sleepy, I realize (now that I have one of my own). The alarm, which I'd triple-checked for accuracy and reliability, woke me at 11:20. I quietly got out of bed and dragged a blanket with me into the living room. I turned on the TV which (thank God) still worked. But could the TV Guide have been wrong? It seemed inconceivable, but I wouldn't relax until I saw the opening title. I was the only one up in the house. I turned off all the lights and sat there waiting on a footstool right in front of the TV set. 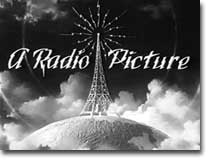 And it came on. "A Radio Picture," the tower sitting on top of the globe, the Morse code sounds on the track. I was on top of the world, too — a little boy getting exactly what he wanted.