A few years ago, there were still sheep in some of the new apartment buildings, so there must have been grass somewhere. In a city famed for panoramas — water, bridges, sky — most of its 13 million residents navigate a surfeit of concrete. Setting out today from a three-bedroom apartment shared not with livestock but with 11 relatives, a man who six months ago was reclining on an Anatolian hillside, thinking of Istanbul but keeping his flock in sight, might walk a dozen blocks through a neighborhood like Bagcilar, midway between downtown and the airport, halfway between one life and another, before finally coming upon a ragged strip of grass. Commuters on the O-3 highway have grown accustomed to seeing people like him up on the embankment, elbows on knees, gazes held above eight lanes of traffic, trying to feel at home.

"They bring the east with them," says Yldirim Ciftci of the migrants to Istanbul hailing from Turkey's Anatolia hinterland. Ciftci made shoes when he first got off the bus 13 years ago from the eastern Anatolian city of Mus. Today he manages a furniture store stocked with the signature items of modern Turkey: sofas and chairs that at the end of the day collapse into a bed for the visitor from back home. In a nation transformed by economic migration, there's always someone crashing in the living room.

(See pictures of the streets of Istanbul.)

"People from Corum make socks," Ciftci continues, stating what everyone already knows in Bagcilar, home to three-quarters of a million people following the money: geography is destiny. "The people from Mardin work in confectionary. Konya people are in foodstuffs." Ciftci, whose name means "farmer," appears mildly ashamed that it took him all of two weeks to find a job in a city so obsessed with moving up the ladder that grave diggers market themselves by etching their cell numbers into headstones: MADE BY CEMAL USTA 0532 266 1276. "I'm not changing my telephone number," says Cemal, who stayed with a relative when he arrived from Erzurum, also in eastern Anatolia, at 15. That was 51 years ago. "The cemetery was a lot emptier then." 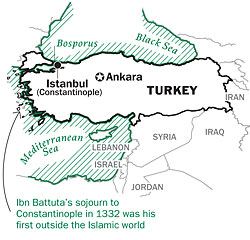 So was Istanbul. The city was still Constantinople — and Christian — when the Muslim traveler Ibn Battuta passed through and declared it the world's largest city. It's no longer that, but a population of 13 million is not small, and the welcome mat is still out. MAY OUR SUCCESS CONTINUE AND ISTANBUL GROW, say the mammoth billboard sheets covering office buildings, advertising Recep Tayyip Erdogan, the Prime Minister whose Justice and Development Party (AKP by its Turkish initials) is of a piece with what Istanbul has become: a place made for one people, overwhelmed by another. Erdogan is Istanbul-born, but he, like Bagcilar's residents, belongs to Anatolia's black Turks. Tied to the land and piously Muslim, they served as a mute contrast to Istanbul's white-Turk secular elite, whose long and tight grip on national affairs stemmed in no small part from a mistrust of the masses. Now the black Turks have remade the city, even as they have recast the country's politics. Erdogan and his AKP have been elected three times, most recently in June, by riding a black-Turk wave comfortable with both Islam and nationalism (which in Turkey is synonymous with modernity).

Weighing the Scales
It's an equipoise the Turkish system has never before managed, this balance of God and country. Four times in as many decades, the military mounted coups in the name of safeguarding the state against assorted threats, including Islam. But a coup is a mechanical solution not available to individuals, who must face their own inner battles of allegiance from the cradle. In Turkey, the first words whispered in a newborn's ear are a verse from the Koran. Yet from kindergarten, one is taught to worship a man in a tuxedo.

"As Muslim parents, we want our children to live in Islam as well as we can," says Sertas Gunes, a Bagcilar real estate agent just up the street from the furniture store. "And as Turks, we want our children to understand how the commander created the country." Mustafa Kemal Ataturk, the man in evening wear smiling from every banknote and town square, abolished the Ottoman caliphate that nominally united all Muslims. In its stead, he elevated its antithesis, the nation-state, with a ferocity that would seem to defy reconciling national and religious identities. Yet something very like reconciliation — call it accommodation — suffuses every conversation on the topic in Bagcilar, where both identities are worn comfortably, one atop the other. "There's nothing confusing about it," says Ramazan Gunes, Sertas' uncle and the oldest of the Gunes real estate agents. "What we have here," says Sertas, "is a country that likes to make it confusing."

See why Turkey's vote is good for democracy.

Next Urban legend the Pull of Tangier