What headlines described as a terrorist attack in the desert just north of the Israeli resort city of Eilat was in fact a sustained assault, a complex military attack that included missiles, mortars, improvised explosive devices, small arms and, on the bodies of two of the seven assailants killed, explosive vests. Israeli security officials had been tracking the militants from the Gaza Strip, where plans were laid for the attack, into the lawless Sinai desert that since the fall of Hosni Mubarak has offered a more and more accessible back door to Israel. But somehow, the militants found a way to strike first, killing seven Israelis on a lonely desert highway.

"It wasn't supposed to end this way," a senior Israeli intelligence officer tells TIME. "And now we have to find out why it didn't end the way it should have."

No group claimed responsibility for the attack, but barely six hours later the Israeli military bombed a Gaza target associated with the Popular Resistance Committees, a militant group formed from the more militant remnants of the secular Fatah faction driven out of coastal enclave by Hamas four years ago. Within an hour, three rockets were fired from Gaza toward the Israeli coastal city of Ashkelon. They were knocked out of the sky by the Israeli anti-missile system known as Iron Dome, but the tit-for-tat exchange raised concerns about military escalation between Israel and Hamas, which disavowed the attack but which Israel holds ultimately responsible for threats emerging from the enclave.

How do they emerge? Gaza's borders with Israel may be tightly sealed, but its western boundary with Egypt has long been porous — shot through with tunnels, as well as the official border crossing — and in recent weeks so have routes south through the Sinai wastes toward the unfenced boundary with Israel. For years under the reign of Egyptian president Mubarak, it was nearly impossible for Bedouin tribesmen or militants from the north to get past military checkpoints blocking the way south, where the Red Sea resorts on both the Egyptian and the Israeli side made tempting targets for terror attacks. But roads that were heavily patrolled a year ago are now largely open to north-south travel. Smugglers in Rafah, on the Gaza border, recently told TIME of having arrived from Sharm el Sheik, on the Red Sea, via north-south roads with no trouble. 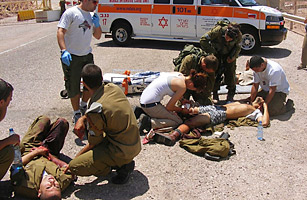 The lack of control has made the region a hotbed for Islamic militants, including extremist aligned with Al Qaeda. Two weeks ago armed Islamists overran a police station in al-Arish, 35 kilometers west of Gaza, distributing pamphlets calling for Islamic rule over Sinai. "We know very well that many militants from Al-Qaeda are now working on the ground in this part of the Sinai, and they can get in and out of the Gaza Strip," says Emad Gad, a political analyst at the Ahram Center for Poltical and Strategic Studies in Cairo. The number of Egyptian troops allowed in the Sinai has been restricted since the two countries made peace, but with the relative chaos of recent months Gad called for a new agreement that would allow a significant influx of Egyptian forces, like the 1,000 troops Israel agreed to allow in last week.

(See TIME's video: "The Tunnel Smugglers of the Gaza Strip.")

"I think Egypt and Israel are victims of terrorism," says Gad, speaking even before Thursday's multi-phased attack, which caught Israeli officials flat-footed.

The attack came on Highway 15, a lonesome and monotonous road that which runs through the Negev Desert toward the Israeli resort city of Eilat. About 20 miles to the north, as the map of Israel tapers toward its tiny boundary with the Red Sea, where Israel, Egypt and Jordan share a shore in the space of six miles, the road runs right alongside an Egyptian border marked only at one-kilometer intervals by stone markers and sun-baked uniformed soldiers who normally keep to the shade. At midday Thursday, motorist Aharon Gonen noticed a man in uniform prone on the side of the road and wondered, as he later told reporters: "Why is he lying on the ground at noon?"

The answer came an instant later, with an explosion of shattered safety glass that announced the first attack. Gonen, who was unhurt, flashed his lights to warn the bus approaching from the other direction but was too late. Seven passengers were wounded by automatic weapons fire. The bus driver proceeded to an Israeli army checkpoint a few miles further on, and a half hour later an Israeli patrol approached the scene. Militants detonated an improvised-explosive device, wounding four soldiers.

Meanwhile, attacks on traffic continued. A second bus, empty except for the driver, was hit by what may have been an anti-tank missile. The driver was killed.

Another missile hit a civilian car, killing the two couples inside. In another car, a sixth Israeli was killed by fire that wounded his wife, who authorities said played dead until help arrived. The seventh fatality was an Israeli soldier killed by a hidden explosive.

Israel shut down all roads into Eilat and sent hundreds of troops on a manhunt. Officials said seven attackers were killed, three inside Israel and four in Egypt — two by Israeli forces in hot pursuit, and two by actual Egyptian soldiers, according to reports. An Israeli military official said the hunt would continue."This kind of operations requires more than seven people," he said. 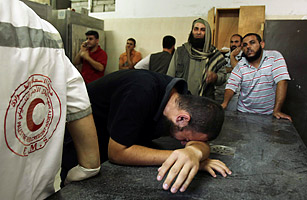 Working against them is a security status quo that changed dramatically the night of Jan. 28 when Mubarak addressed a nation that expected him to step down. After a day of intense clashes between protesters and Interior Ministry forces in cities across Egypt, the latter withdrew from their posts — including those in the Sinai, where the attacks from Bedouin protesters were particularly violent.

During and in the immediate aftermath of the uprising, thousands of prisoners — many of them terror suspects or Sinai Bedouin — escaped or were released from prisons throughout Egypt. And even as a weakened Interior Ministry returned its forces to Egypt's streets, it failed to do so in parts of eastern Sinai, including the towns of Rafah and Sheikh Zweid near Egypt's border with Gaza, where Bedouin tribal leaders and smugglers had threatened them with death if they returned.

In the next six months, Bedouin smugglers and Islamist groups in the Sinai enjoyed a period of unprecedented freedoms. In the absence of a police force, tribal law has haphazardly filled the void of authority. But militant activity, smuggling, and tribal conflict have raged, largely off the radar of a military leadership that is already overwhelmed by the broader task of running the post-Mubarak Egypt. "The general perception is it's the Wild West on steroids at this point," says one high-ranking Western diplomat in Cairo. "The smuggling organizations have been relatively unchallenged for the past few months." With reporting by Abigail Hauslohner/Cairo