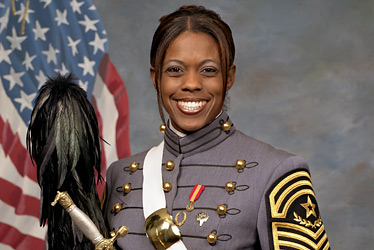 Emily Perez, the highest-ranking black and Hispanic woman cadet ever to graduate from West Point, was killed by a roadside bomb near Baghdad on Sept. 12
US ARMY/AP

Perez wasn't bashful about her faith either. Every Sunday morning, she'd wake up by playing gospel CDs as she read the Bible. Her roommate Ramirez-Raphael, always trying to catch up on sleep, says Sunday mornings weren't safe until Perez — and the tambourine she always took to play in the Gospel Choir — were at church.

That faith drove Perez to envision a life of service beyond war. As a teenager in Fort Washington, Md., she set up an AIDS ministry in her church. And although her faculty advisor Ender says she could have been literally anything she wanted to, she was most passionate about global-health issues. "She could have been the next Paul Farmer," says Ender. "That's the commitment, and the talent, that she had."

Roadside bombs are generally believed to be the top killer of U.S. troops in Iraq (according to icasualties.org, almost a thousand U.S troops have been killed by the devices so far). The threat has persisted despite a multibillion-dollar U.S. campaign to neutralize it, and more than any element in Iraq has spread the dangers of war evenly from frontline soldiers to support personnel.

Perez understood those risks. She had chosen to go into the highly selective Medical Service Corps and, even though it's not a combat branch, she understood that she'd be in as much danger as anyone. Because of the shortened officer basic training of the medical corps, Ramirez-Raphael says that Perez "knew she would probably be deployed before the huah! infantry set were. She told me, 'I'll be there and back before those guys even get their boots in the sand.'" Ramirez-Raphael says that Perez had already survived several previous convoy attacks in Iraq. After one of those incidents, a mutual friend from West Point happened to be in the Quick Reaction Force that came in to secure the scene. "He told me that Emily held her own [afterwards]," says Ramirez-Raphael.

But there is no holding one's own against a fatal IED attack. It comes in a blast of dust and fire and, in an instant on Sept. 12, all of that exquisite training, and all of that irrepressible vitality, was stilled.

Classmate Paul Lushenko, now an army intelligence officer at Fort Huachuca, Ariz., says that the news of Emily's death hit everyone in the Class of 9/11 hard. "I think that we were under some sort of inability to understand that probably some of our classmates were going to die," he says. "I don't know. You just don't think it's going to happen to you."