Fred: ... and one of the things that keeps popping up is this about subtext. Plays, novels, songs — they all have a subtext which I take to mean a hidden message or import of some kind. So subtext we know. But what do you call the message or meaning that's right there on the surface, completely open and obvious — they never talk about that. What do you call — what's above the subtext?

Fred: [pause] OK, that's right, but they never talk about that.

"'Kong' was never intended to be anything but the best damned adventure film ever made, which it is; and that's all it is."

On the wall of my office is a strip of celluloid about a foot long, flat as a knife blade until it folds at each end. It is a piece of 16mm film that must be 40 or 50 years old. Along one side you can see the waveform of the optical soundtrack, a continuous line of jagged ridges and valleys; on the opposite side runs a line of sprocket holes that allow the cogs of the projector to pull the film past the lamp. Letters can be seen between the holes: G, E, V, A, others I can't make out. Maybe they identify the film stock or the source of the print.

In the center are the frames themselves, a credit sequence in block-like lettering with deep perspective shadows. The words appear over a Deco keystone graphically linked to the logo of the studio that made this movie: RKO Radio Pictures. It's hard to make out the words in the 16mm frames; the sequence is right at the end of a dissolve, and in many of the frames you read two words in the place of one. Only at one end of the strip do the words become clear: there's "Technical Staff," under that "E.B." someone, maybe "Gibson," then "Marcel Delgado," "Fred Reese," "Orville Goldener" maybe, and a last name impossible to distinguish.

At the top the most important credit of all, for "Chief Technician." The man's name is Willis O'Brien, the first great artist of stop-frame animation. For special effects fans, he's Mickey Mantle, Michael Jordan and the Beatles all wrapped up in one bespectacled, balding, paunchy little guy. His innovations affected an entire industry and created a whole genre. He's the one who made the monkey move, the one who made "King Kong."

I have seen "King Kong" more than any other movie. I lost count at 33 viewings back when I was around 17, and that was a very long time ago. I'm sure the count stands at over 50 now. I'm not sure it's the most significant film in my canon, but it's a big one, like "Citizen Kane" or "Vertigo" or "Taxi Driver" or "La Dolce Vita." "Kong" was the first film to which I ever gave a close reading, in the narrowest technical sense. Seeing the film as often as I did made it possible for me to examine each contribution in depth — fortunately, it's an unusually rich film in every category. Understanding the pieces of "Kong," what made each component work, helped me later with "Citizen Kane" and "Psycho" and hundreds of other movies. It was my Rosetta Stone.

I think all Americans have a close relationship to their fabulous invention, Hollywood. But for obsessionists, as always, that relationship is more intense.

I grew up on a desert island populated by a malevolent alien race. The only time I ever got away was one hundred minutes at a time, at the movies.

I was three years old when we moved to 1118 Pauline Avenue, Columbus, Ohio. It was my folks' first house, purchased with a G.I. Bill down payment. It was 1956 and the baby boom had begun. Postwar demand — the Korean War, that is — was forcing contractors and developers to find newer, faster, and cheaper ways of building houses. Levittown was the prototype: huge clusters of small homes, quarter-acre plots and designs straight out of engineering catalogs.

It was a fine house, solid as might be expected, far better than the cramped tenement on the Lower East Side where I later chose to live. But there wasn't a single tree for blocks around. In fact, when we moved in there wasn't even any grass. I remember my father out in front, in the dirt patch meant to be a yard, unloading sod and pressing it down with a huge steel sod-roller. To me it was like living in a desert. Walking home from school, sitting on a curb playing marbles, riding my bike — there was never a break from the sun. It felt like Arizona, not Ohio.

It was kind of a tough neighborhood, too. Not big-city tough like the slums in "Los Olvidados" or "Pixote" or Hell's Kitchen in "Dead End," but still full of peril to a kid. Especially when I got a little older and developed some dangerous habits — like reading. I learned to walk around with the book covers hidden, so the sci-fi titles looked like schoolbooks. I would still get my ass kicked occasionally, no matter how careful I was. It would happen in the schoolyard, on a corner, or in somebody's backyard — before I knew it I was on the ground with some stringy delinquent straddling me, pounding his fists into my stomach.

These were working-class kids, and a lot of these guys ended up in Vietnam just a couple years later. In those days they were still doing the thing with the cigarettes — the pack held in place with a rolled-up T-shirt sleeve. Elvis was still important, still vital, at least to them. They wore their hair like Elvis, slicked back. They tore apart cars or motorcycles and undeneath their fingernails there was always a line of black. I called them greasers. They had names for me, too.

Columbus, Ohio, circa 1963 — can you see how something as ephemeral as a movie might take on some significance?

I was into big monsters long before I'd seen "King Kong" or even heard of Willis O'Brien. My brother and I shared a passion for the work of Ray Harryhausen, the second great Hollywood master of stop-frame (also called stop-motion) animation. Now almost entirely supplanted by digital modeling and animation, the technique was expensive and difficult. A flexible model of the creature-protagonist was placed in a miniature set in front of a locked-down camera. The model was moved a fraction of an inch and a photo was taken, a photo that constituted one frame of the finished sequence. The arm or the legs or the head of the model was then moved another fraction of an inch, and another frame was exposed. By the end of a day's shooting, the creature might have moved a few inches.

Later these animated sequences were combined with matte paintings that would fill in parts of the frame outside the scope of the table-top set, giving the illusion of mountains and clouds in the distance, maybe a bottomless chasm on the left. More expensive productions would integrate actors in the foreground as well and then, as in the case of "Kong," find clever ways to suggest interaction between animated and live-action parts of the frame.

In the hands of artists, stop-frame animation combined with matte painting produced sequences that were not only entertaining but also possessed an uncanny beauty. There is something inherently otherworldy about the process. It never looks "real," no matter how much money is spent. This reality issue was never a problem for me; I liked the fact that it was so stylized. (I'm accquainted with reality, and like most people I want to see something else. That's why I pay to see Russell Crowe and Julia Roberts — they don't look like people I know.) 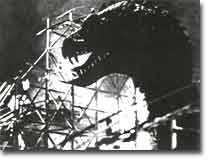 Harryhausen worked his magic in film after film, holding me in front of a television set on Saturday afternoon when other, smarter kids were out running around. The first one that made an impression on me (coincidentally, Harryhausen's first solo commercial hit) was "Beast from 20,000 Fathoms," a 1953 B-feature starring a "rhedosaurus" awakened from eons-long slumber in arctic ice by — what else? — nuclear testing. It was based on a Saturday Evening Post story by longtime Harryhausen crony Ray Bradbury.

After rubbing the sleep from his eyes with a fishing boat, tangling with a lighthouse, and eating up a diving bell containing avuncular professor Cecil Kellaway, the Beast faces Army sharpshooter Lee Van Cleef in a final showdown — the Cyclone roller coaster in flames, dying monster lashing out — on Coney Island. 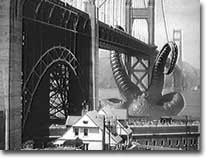 Soon after seeing "Beast from 20,000 Fathoms," probably in the early '60s and definitely on television, my brother and I began to check out the other items in the Harryhausen oeuvre. The next great one we saw was "It Came from Beneath the Sea"; it's still one of my favorites. The giant octopus wrapped around the Golden Gate Bridge has become an iconic image in American pop. Next time you see it look closely and note the octopus has only five tentacles, three fewer for Harryhausen to move during each day's tedious shooting. The producers saved $10,000 per tentacle.


("It Came From Beneath the Sea" also introduced me to two important actors in my Chiller Theatre Pantheon: Faith Domergue, Howard Hughes protégée and highlight of the classy "This Island Earth" (so tediously lampooned on "Mystery Science Theatre 2000") and Kenneth Tobey, a guy who personified an easygoing, Howard Hawks kind of professionalism in numerous sci-fi flicks, from "The Thing From Another World" to "Gremlins." I don't think there's a star on the Walk of Fame for Kenneth Tobey, but any fan of the genre knows just whom I'm talking about.)

Along with "Beast" and "Beneath the Sea" there was "Earth Vs. the Flying Saucers" — ineradicable images of wrecked saucers slicing through the Capitol Dome — and "20 Million Miles to Earth," where Rome's Coliseum stood in for the Coney Island roller coaster. But by the end of the decade, the genre Harryhausen helped define was dying at the box office. Pop cinema was getting sexier and a lot more violent. As Ray later said about his unsuccessful 1969 picture "Valley of the Gwangi," "A naked dinosaur just was not outrageous enough."


Harryhausen and his longtime partner, producer Charles Schneer, moved to England (cheaper production costs, the same reason "Star Wars" avoided California) and began working in color, making films that didn't even mention atomic testing and found their sources in myth or literature. Ray was on a roll, making money with his new color process (Dynamation) and paired with the greatest film composer who ever raised a baton, Bernard Herrmann. First came "The Seventh Voyage of Sinbad," followed by "The Three Worlds of Gulliver," then "Mysterious Island," and finally the stop-frame masterpiece, "Jason and the Argonauts."

"Jason" fared poorly with both critics and the public. The market was glutted with dubbed, Grade-Z reworkings of Greek and Roman sagas, a cycle that began with the unexpected success of the campy Steve Reeves "Hercules" in 1959. But "Jason" has aged well, primarily because of its fine cast, incredible score and animated sequences that are still studied in film schools around the world. "The fight with the skeletons" is a phrase you will hear again and again when discussing the genre with experts, one of the best-ever examples of interaction between live actors and animated figures. It took four and a half months to shoot! There are seven skeletons, each separately animated, each bearing a sword, each engaged in combat with various Argonauts. (Poor Argonauts: you can't kill a skeleton — they're already dead.) You see stuff like a shot over Jason's shoulder as he stands on a ruined temple wall, looking down on a crowd of waving swords and skull faces that are somehow snarling. Nowadays this stuff is routine in movies like last year's "The Mummy," but back in 1963 I was floored.