In so doing, Reid became a member of the fastest-growing religion in Britain. Nobody has an accurate count of the number of British Muslims—estimates range from 1.5 million to 2.5 million—but they run the gamut of all social classes. In the West End of London, rich playboys from the gulf states are staples of the clubbing scene. In rundown mill towns in the north of England, by contrast, thousands of native Pakistanis struggle in an environment where jobs are scarce, racism is rampant and arranged marriages are the norm. 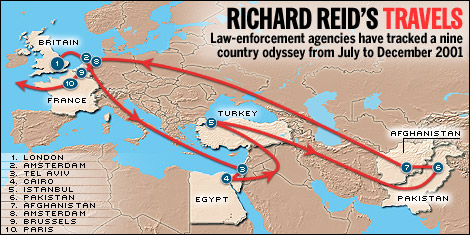 It was long assumed that the growth of Islam in Britain was simply a function of immigration. But that underestimates the religion's appeal. Since the early 1980s, Bangladeshi and Pakistani imams, often associated with evangelist Islamic groups, have targeted young black inmates of British prisons. "Islam is a sort of natural religion for underdogs," says Ziauddin Sardar, a British scholar of Islam, "and that's one reason why Afro-Caribbean people have found its message very attractive." Prison authorities have allowed imams to bring literature into the jails—everything from copies of the Koran to anti-American leaflets highlighting the importance of jihad. Only since Reid's arrest has there been any vetting of the publications.

At first Reid did not align himself with extremist groups. On leaving prison in 1994, he gravitated to the Brixton Mosque and Islamic Cultural Center, a rundown Victorian house in the heart of black London. The Brixton mosque has a reputation for homeyness. Each morning children stream into the mosque's schools, brought by mothers in head scarves or veils. The mosque doesn't ask many questions about a believer's past. When you come to Islam, says the mosque's chairman, Abdul Haqq Baker, you make a fresh start. Each Friday 400 to 500 worshippers attend prayers, the majority of them black Britons.

Reid, says Baker, was soft-spoken when he first attended the mosque and "very anxious to learn." Another member describes him as gentle and amiable. That distinguished him from Brixton's most notorious alumnus. Zacarias Moussaoui, a Frenchman who was detained in Minnesota last August and later charged with complicity in the Sept. 11 attacks, worshipped in Brixton while studying in London. Moussaoui is remembered in the mosque as a committed hard-liner.

The precise nature of the relationship between Moussaoui and Reid is unclear. They certainly overlapped at Brixton, but Reid, after spending a while there, moved to the Finsbury Park mosque in north London, notorious for the radicalism of its message and the number of suspected terrorists who have worshipped there. Moussaoui was a regular at Finsbury Park, as were other al-Qaeda operatives, such as Djamel Beghal and probably Kamel Daoudi, two Frenchmen currently being held for their alleged role in a plot to blow up the American embassy in Paris. Nizar Trabelsi, a Tunisian former professional soccer player now being held in Belgium, who is alleged to have been the designated suicide bomber in the Paris-embassy plot, is also thought to have frequented the mosque.

Finsbury Park is at the heart of the extremist Islamic culture that French authorities call "Londonistan." So are the prayer meetings held by Abu Qatada, a fiery Palestinian cleric originally from Jordan. Britain's Muslims aren't necessarily more radicalized than those in communities elsewhere in Europe, but extremists among them may have greater liberty to operate. The British have no system of national identity cards. And the police have traditionally adopted a policy of "watchful tolerance" of extremists, aimed at keeping them aboveground. From afar, that policy can look lax. Watchful tolerance makes sense only if someone is actually watching. Abu Qatada, who has been named in American court testimony as a member of al-Qaeda's fatwa committee, disappeared from his home in west London around Christmas, just before he could have been detained under new antiterrorist legislation.

The mosque in Finsbury Park epitomizes the British attitude. It is the sort of place where you can buy stomach-turning videos (lots of throat slitting) made by Islamic extremist groups. The sermons of Abu Hamza al-Masri, the mosque's one-eyed, steel-clawed imam, continually stress the importance of jihad. Baker says the mosque is dominated by adherents of Takfir wal Hijra, the neo-fascist Islamic ideology influential among European operatives of al-Qaeda. However extreme its message, Finsbury Park is undeniably popular. At midday prayers on a recent Friday, Abu Hamza preached to a congregation of about 1,200, who came from all over London. Sardar explains that the mosque attracts "younger, more disaffected Muslims, mainly from working-class backgrounds, mostly unemployed, unmarried. These guys see themselves as totally under siege. For them, jihad is a salvation." Sardar might have been describing Reid.