With the New Year upon us, this week marks the start of the postholiday season of running around like a headless turkey. If 2009 has already got you exhausted — from playing catch-up at the office or battling jet lag from a holiday trip — there are a few ways to punch up your flagging energy without downing gallons of coffee. Try these bite-size chews — they're like a pocketful of pep. 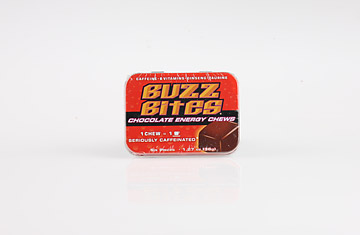 Buzz Bites
I made the mistake of eating two Buzz Bites after my morning coffee. Whoa there, Speedy Gonzales! Should I be driving? A tin comes with six silver-wrapped chocolate or mint-chocolate chews, each containing 100 mg of caffeine (roughly equivalent to a cup of joe and more than in a typical energy drink), a good dose of B vitamins, as well as ginseng and taurine. After my three-hour drive on three hours of sleep, that tin somehow pulled me through a full night of work. But in my sleep-deprived state, it also made me mesmerized by all the pretty colors on the TV. So beware how you use the force. Price: $3.99 for six pieces 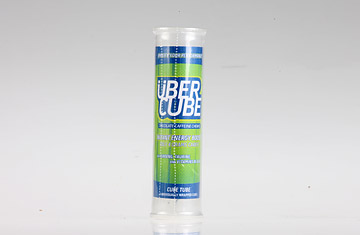 Uber Cube
Piece per piece, Uber Cubes feel just a sliver less über than Buzz Bites, but if you're the type who pops morsels out of habit and has a sensitive system — or just likes chocolaty, chewy things — these offer a solid buzz without being overwhelming. I chomped on three squares in a deadline pinch, and my neck did a 90-degree snap to the computer screen. (Nota bene: When I took Uber Cubes in the morn in place of coffee, they acted like caffeinated Ex-Lax, as did the Buzz Bites; also, both curb hunger well on an empty stomach.) The tubular packaging is also über-convenient — the plastic cylinders are now my favorite places to store quarters, paper clips and earplugs on the go. Price: $3.99 for six pieces 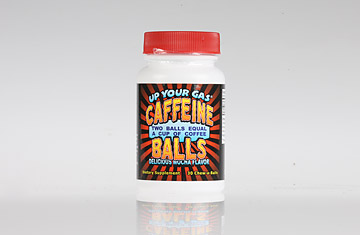 Caffeine Balls
Think powdery puppy chow, not gumballs — but don't let that deter you from sucking on some Caffeine Balls, especially if you don't want a mouthful of sticky. Two chewable chalky balls are supposed to equal the jolt of a cup of coffee. I popped a few of the mocha-flavored pellets late one night, and after about five to 10 minutes, I was up eyeing the door instead of my bed. Price: $14.95 for a 90-ball bottle 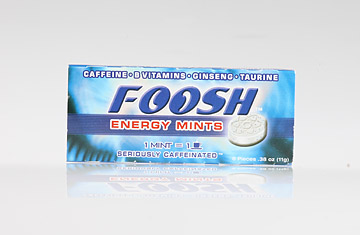 Foosh Energy Mints
I recently endured a painfully dull, no-dozing-allowed theater performance. But when I started to unwrap a caffeine chew, my neighbor shot me a tight-lipped teacher look. So I reached for a pack of Foosh Energy Mints — the round whites, by the same makers of Buzz Bites, are available in a zip-lipped blister pack — and I sucked away quietly through six mints. I felt as if I could've shot minty smoke out of my eyes. Well, at least that lady couldn't be mad about my breath. Price: $6.75 for three six-piece blister packs; $3.99 for a 12-piece tin 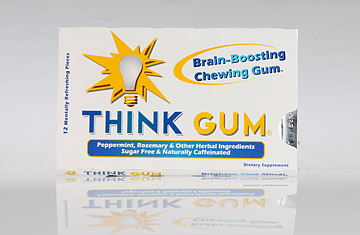 Think Gum
Think Gum features a concoction of "brain-boosting" herbs (including gingko biloba, bacopa and peppermint) and naturally occurring caffeine (guarana) that's supposed to help with not only alertness but memory too. I wouldn't discount the placebo effect, but I can't guarantee the instructions on the package — "For best results, chew while learning or studying and again to recall information" — will make you smarter. Still, this gum does deliver an even-keeled, concentrated boost, vs. a spiked buzz. I started chewing the recommended two-piece dose and felt a little more alert but not antsy. Then I popped a couple more for the road. Hmm, this is kind of nice. The product contains sweeteners like maltitol, which may irritate sensitive teeth, and the gum turns slippery and disintegrates if you chew it for a while. It periodically stuck to one filling, but that didn't keep me from getting attached to it. Price: $1.99 for a 12-piece blister pack