The newly reopened Fontainebleau Miami Beach resort's $1 billion renovation included putting an Apple iMac in each of the hotel's 1,504 rooms. With that, the Fontainebleau went "paperless": no in-room stationery, phone books, menus, newspapers — that's now available online only. Still, we figured the hotel's guests — along with the rest of the world — might want to write down a note now and again, so we fingered some of the most unusual and travel-friendly pens on the market. 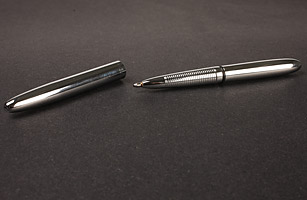 Fisher Space Pens
If they're good enough for astronauts, they're good enough for you. The cartridge of the Fisher Space Pen is pressurized with nitrogen, so it doesn't rely on gravity to work. You'll never have to shake it to get it to write, and you can even write with the tip angled up — against the nearest wall at the airport, say, scribbling directions. The top-selling Bullet models — in finishes ranging from blueberry to lacquered brass — have a decidedly sexy aesthetic, but the Trekker model is better suited for travel, with its key-ring cap and handy carabiner and lanyard. The pens have a narrow grip, so they're not for everyday use if you have hand or wrist issues like I do. But I'd keep one in my car: It can write over water and grease spots, and withstand extreme temperatures (-30 to 250 degrees F). It faithfully delivered after a lonely night in my freezer. Price: $25 (Trekker); $20 (Bullet) 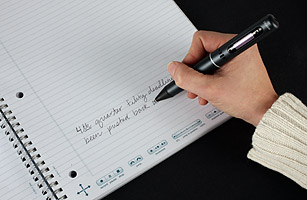 Pulse Smartpen by Livescribe
Do you covet your kid's Leapfrog Fly computer pen? Here's the version for adults. The magic of the Pulse Smartpen and its customized Livescribe dot paper is that you can write while the pen is recording audio — and the pen will remember what was said when. Later, when you go back and tap the pen on your text (for example, "Take the A train to Brooklyn"), the pen will play whatever audio was recorded at the time, such as the cabbie's warning that the A train's running on the F line this weekend — and the sound quality is surprisingly clear. The Smartpen is the perfect tool for taking notes during a class, meeting or interview; it can also save images of the notebook pages you've written on, and all files can be uploaded to a computer via USB, then saved or emailed. On Nov. 24, the company will roll out Livescribe Desktop software for Mac, along with an upgraded Windows version, which includes a new handwriting-to-text translation tool. Speaking of which, the pen's software also includes translations for 21 different words — such as please, coffee, chocolate, water, bananas, beer and thanks — in Spanish, Mandarin, Arabic and Swedish. What else do you really need? Price: $149.95 (1 GB); $199.95 (2 GB) 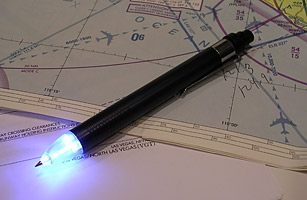 The Pilot's Pen
This illuminated pen was originally intended for pilots who need to jot down notes in a dark cockpit. But when designer and pilot Robert Cullinan put the product on Amazon.com "just to see what would happen," the raves and orders took off — from theater critics, night nurses and anyone wanting to avoid the wrath of a sleeping plane mate. Two LED lights, powered by one AAA battery (which lasts up to 20 hours), are fitted inside the cone of the Pilot's Pen, so the light is close to your writing surface and casts an even glow. And while you click the pen top to turn on the light, you twist it to roll out the point, so you can choose when you need the extra lumens. The Pilot's Pen comes with an extra battery and blue ink cartridge (black ink is available for purchase separately). Bonus: It doubles nicely as a flashlight in an emergency. Price: $19.95 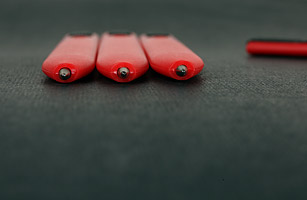 Grippa Slip Pens
Flat pens! They're kind of flimsy and feel disposable, but I think they're meant to be. The Grippa Slip Pens work fairly well, and their bookmark design fits great into planners, datebooks and checkbooks — if you use any of these things anymore. In any case, these pens are nice to stash in random places just for those times you might wind up needing them. Price: $2; cheaper when purchased in bulk 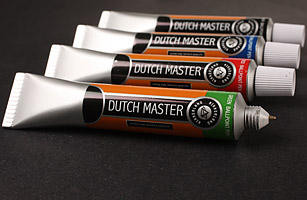 Dutch Master Tube Pen
While the tubes I got my hands on are labeled as having different colored ink — but are all black — the Dutch Master Tube Pens are easy to find in a jumbled purse or bag, and cute enough to keep a cawing kid occupied. And at least you'll outsmart anyone trying to swipe your pen. Price: about $2