One glorious fall day last year, I was walking the backstreets of Hangzhou, in Zhejiang province, China, enjoying the sights — fungi as big as cart wheels, tourists posing for snapshots in Song-dynasty costumes — when I saw men hurrying into a quiet, dignified building. It took me a minute to realize that it was a mosque, the so-called Phoenix Mosque of Hangzhou, founded in the Tang dynasty, more than 1,000 years ago.

In all likelihood, it was in this mosque that Ibn Battuta worshipped when he visited Hangzhou in the 1340s. He noted the city's size and charm — Hangzhou, then as now, sat on a beautiful lake, cradled by gentle green hills — and he wasn't the first traveler to do so. Some 50 years before, Marco Polo, a Venetian merchant, had spent time in Hangzhou and rhapsodized about it as "without doubt the finest and most splendid city in the world," which indeed it was.

(See "At the Water's Edge in Hangzhou.")

Some 60 years after Ibn Battuta's visit, the culture that had built the wonders of Hangzhou sponsored expeditions of its own: seven epic voyages, led by the great admiral Zheng He, that ranged from the Pacific to the Swahili coast of Africa. I don't know for sure that Zheng He ever visited Hangzhou (Ma Huan, his scribe, was from the neighboring town of Shaoxing), but given its eminence, it seems likely that he did. In which case, the city on the West Lake is the one place that all three great explorers knew. 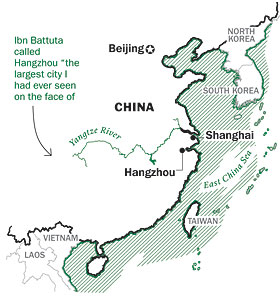 That is worth pondering. It was a great Chinese city that the three men had in common, rather than a town of northwestern Europe such as London or Paris — not much more than pestilential collections of hovels in the 14th century — whose merchants and thinkers would soon shape the world as it started its long turn on an Atlantic axis.

That Chinese city, moreover, was cosmopolitan. It wasn't just Muslims who were well represented there; Ibn Battuta noted the presence of a Jewish community, and there were surely plenty of Buddhists in Hangzhou — practicing a religion that had migrated from India — as well as Nestorian Christians, who flourished under the Yuan dynasty.

There are obvious lessons here. The lives of the three explorers remind us that what we think of as the modern world, dominated by Atlantic technology and intellectual inquiry, is not the only world there has been — and, surely, as economic power shifts to the south and east, not the only world there will ever be. China's inexorable rise is part of that coming story. But Hangzhou also reminds us that when China was the greatest power on earth, it was a society open to influences from all the known world. It sometimes suits both Chinese authorities and those who fear China's power to imagine that its culture and history have existed in a hermetic space, distinct and different from those of the West. That's always been nonsense, and Hangzhou is the place to remind yourself of it.

Finally, remember that whatever their linguistic skills, two of those three men would have had no trouble communicating with each other. Ibn Battuta, a jurist from Tangier, and Zheng He, a soldier from Yunnan, nearly 10,000 km distant, were both Muslim, sharing a god and a culture. In the past 25 years, we have lazily allowed ourselves to think that the only way the world is knit together is through economics, business and finance — that this is what globalization means. But that is not true now, and it was not true when, within 100 years of one another — or so we can imagine — Ibn Battuta, Marco Polo and Zheng He each took a boat onto the West Lake under a full moon, gazed at the sky, remembered his journey and knew that the world was one.

Next Editor's Desk: An Islamic Odyssey