For the past 24 years, José Antonio González has risen early one morning in June and carefully applied black eyeliner to the creases behind his lashes. Instead of the Oxford shirt and pressed trousers the 45-year-old accountant usually wears, he slips on a satin blouse and shimmery pantaloons. And then, dangling a scabbard from his waist and planting a turban on his head, González goes out and joins hundreds of other Moors in the southern Spanish town of Mojácar as they make their last stand against the Christians.

There may be no more curious remnant of the Muslim kingdom that Ibn Battuta knew as al-Andalus than the festival of Moros y Cristianos (Moors and Christians). Commemorated in towns throughout Spain, it enlists entire populations into elaborately costumed "battalions" to re-enact the medieval surrender of Spain's last Muslim rulers to the conquering Catholic kings. But Moros y Cristianos is hardly the only trace of Spain's 800 years of Islamic rule. From architecture to cuisine to the most common vocabulary — including the ubiquitous olé, a distant relative of Allah — the country's Muslim past is deeply woven into its present. For centuries, this was a characteristic to be denied, an almost shameful identity against which "true" (read: Catholic) Spaniards defined themselves.

(See pictures of the running of the bulls in Spain.)

In today's Spain, physical and symbolic remnants of the glorious civilization that was once al-Andalus are celebrated as tourist attractions and, more important, as a part of Spain's newly heralded multiculturalism. But Spain has a more complicated relationship with real Muslims — the ones who pick Europe's vegetables and open schools and businesses and build mosques. 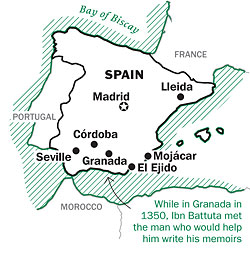 Immigration came later to Spain than to Britain, France or Germany; indeed, most Muslims in Spain are first-generation arrivals. Only when the Spanish economy took off after the country joined the E.U. did Muslims, particularly from Morocco, begin migrating in significant numbers. Now there are an estimated 1.5 million Muslims in Spain, and they are not always easily assimilated into a culture that characterizes itself as conservative, homogeneous and very, very Catholic. Already, the city of Lleida, along with several other towns in the eastern province of Catalonia, has moved to ban the veil. And in local elections on May 22, anti-immigrant parties won seats in both regional and municipal governments. In today's Spain, the imagined past is always rubbing up against the conflicted present.

Back to the Future
You could start at the beginning, with Córdoba, the seat of the Moorish caliphate. When Abderrahman I came to power in 756, he remade this city into a vision of earthly paradise. In subsequent decades, Córdoba's poets would pen exquisite odes to romantic love, its astrologers would track the heavens more accurately than ever before, and sewage — shockingly — would run through neatly enclosed pipes. But of all the accomplishments of the Umayyad dynasty, none was so breathtaking as the Mezquita, the stunning mosque built on the remains of a Visigoth church (and a pagan temple before that). Eight hundred striped arches ran through its 24,000 sq m, tricking the eye into thinking they were an endless forest of red and white. After the success of his 16th century reconquest, the Habsburg Emperor Charles V had the Mezquita's center arches ripped out and replaced with a heavy, carved nave appropriate to the building's new status as Córdoba's cathedral — a status it retains to this day.

(See pictures of immigration in Europe.)

To reach the cathedral, Demetrio Fernández crosses the Moorish-style patio of the Bishop's Palace. He is a heavyset man, but elegant in his bearing as he strolls past stands selling filigree hands of Our Lady of Fátima and restaurants serving gazpacho, then walks under orange trees irrigated with canals built more than a millennium ago. All this before he passes under those rows of striped Islamic archways. And yet, the bishop of Córdoba harbors no ambivalence about the structure's meaning. "Why should Muslims be allowed to pray there?" Fernández asks. "The real question is, Why do people find it strange that they shouldn't be? It's a cathedral."

He is referring to a campaign begun years ago by the Junta Islámica, a group of mostly Spanish converts to Islam. Arguing that the Mezquita, with its glittering mihrab and intricately carved choir stalls, could serve as an important example of convivencia (social harmony) in an age of cultural conflict, the Junta Islámica requested that it be opened to Muslim prayer. Córdoba's bishopric refused. When 120 Muslims from Austria entered the building in 2010 and began to pray, the Mezquita's security guards, who work for the diocese, moved to eject them, and a scuffle ensued.

More recently, Fernández has argued that the building itself should be referred to as the catedral and not the mezquita, and asked the municipal government to rewrite street signs identifying it as such. Junta spokesperson Isabel Romero is against that effort: "To try to erase history is a great error." Bishop Fernández deploys the same tactic, noting that the building was a Visigoth church before it was a mosque, that Christian architects imported from Constantinople helped transform it into the Mezquita. Most important, he says, it's been a cathedral for the past four centuries: "It's an anachronism to call it anything else."

Next A Voyager for the Ages