Because Confuciusornis is such a common fossil in the Liaoning deposits, scientists now speculate about vast colonies that may have lived on the shores of the ancient Chinese lake. Of all the feathered dinosaurs, Confuciusornis is the oldest to exhibit a nearly-modern flight apparatus. It still had fully-functional raptorial claws on its thumb and middle fingers, but its index finger — the finger that supports the flight feathers — was composed of broad, flat bones and a reduced claw. There are several anatomical peculiarities, including flight feathers that are longer than the body, which indicate that it had already diverged from the direct line leading to birds. 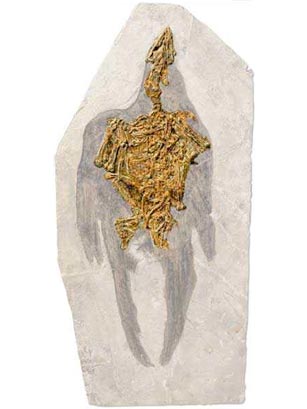 Next The Evolution of Flight