Why We Chose Him

For the NASCAR nation, Dale Earnhardt has been front-page news every Sunday of every race season, and some Sundays in between. For the rest of Americans, he was a name they knew, the emblem of a sport they'd seen here and there but probably didn't know too much about.

Then Earnhardt's black No. 3 Chevy hit the wall on the final lap of the first and biggest race of the year, the Daytona 500, which this year was also the kickoff for a new era for NASCAR. Now, there won't be many weeks when TIME.com awards the Person of the Week posthumously. But the title recognizes echoes as much as men, and this was the week the stock-car-racing world spent stumbling around with its heart ripped out.

And this was the week the rest of America tuned in.

Earnhardt, the doctors say, died instantly when he careened into the wall between the third and fourth turn of the final lap of the first race of the 2001 Winston Cup season, making one last push for victory lane. Michael Waltrip won, in one of Dale's cars, and Dale Jr. finished second, and the peculiarities of the moment allowed the pair to savor some unalloyed Daytona glory before the news caught up to them that The Intimidator's tame-looking crash had been his last. 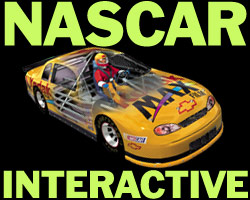 The death of the sport's biggest draw and love-him-or-hate-him hero led every newscast Sunday night and fronted every newspaper in America on Monday morning. Throughout the week, cable news channels brought us the daily press conferences, tearful interviews with mourning fans, and a memorial service befitting a folk hero. Sunday's race in Rockingham, N.C., not far from Dale Sr.'s hometown, will be a wailing wall. But Dale Jr. will be out there, in one of his father's cars, because Dale Sr. would have wanted it that way. The race will go on.

But will it ever be the same? This was the year NASCAR, with new venues, new rules and a new TV deal, was making a push to add another rung of American popularity. The sport had already grown far beyond its original blue-collar southern fan base; the NASCAR traveling show already packed 200,000-seat arenas with ease wherever it went. Now, with the Fox deal, it was bidding for the Sunday-armchair cultural prominence of NFL football, all the while hoping that the infusion of money, marketing and the scrutiny that goes with them would never cause its die-hards to wonder what had become of the sport they loved.

It was counting on its Dale Earnhardts to help bridge a tricky divide. The purebred artistries of the NBA's Bird, Magic and Michael made that sport's gaudinesses easy to forgive; these days those criticisms are stickier. Any sport of individuals — and in this era, aren't they all? — needs the reflected light of its heroes to keep eyes off its pockmarks. In joining the big-money world of pro football, baseball, and basketball, NASCAR will now have to watch out harder than ever for its soul.

Dale Earnhardt is dead; that is not the way we are used to having a sports superstar depart the field. Sadly, race fans are more used to death than those of other pastimes. NASCAR officials maintain that safety will always be a top priority. But whether you tune in for the competition or the crashes — look deep in your heart before answering — danger is part and parcel of the thrill. When a sport's competitors strap themselves into two-ton steel thoroughbreds and take off around the crowded oval at nearly 200 miles an hour, death will always hover above the infield.

The Earnhardt tragedy may well cause some fans to take another hard look at the thing they love. What risks are fans willing to tolerate as spectators/abettors to an inherently dangerous sport? For some, the death of a hero of Earnhardt's magnitude will awaken disgust, or shame. There is a reason that today, gladiators do battle only in the movies.

But this was Dale Earnhardt, whose life was racing, and like the cliché goes, he knew the risks. His wife and family knew the risks. Dale Jr. knew the risks, risks that basketball, baseball or even football would not tolerate. There is something undeniably noble about this superstar's exit, a racer dying in the thick of the thing he loved. A soldier carried out on his shield at the Daytona 500.

For the non-fan, those who knew Earnhardt's totemic name but not his story or his sport's, the rush of coverage surrounding his death this week was a stirring introduction. They saw NASCAR nation revealing its nobility in its tears. That Earnhardt was, by all accounts, not only a great racer but also a heck of a guy was flattering to the sport, and that he died on the track was in a grave way flattering to every driver who takes to the track this Sunday in Rockingham.

Some race fans may be turned away by the tragedy; other, new ones may be drawn to the sport by this proof that it is not trivial. Certainly NASCAR faces a huge charisma vacuum, and it will never forget the Daytona 500 of February 18, 2001, a milestone of many kinds. Mourning passes into remembrance, and the race will go on.

Everyone's best guess is that Dale Earnhardt, particularly — who parlayed an eighth-grade education into a multimillion-dollar empire, just by being the best at the thing he loved — would have wanted it that way.