David Rosenberg, chief economist and strategist at Gluskin Sheff in Toronto, long called the stock market tune at Merrill Lynch. On Friday, as the Dow flirted with 11,000, the closely followed market seer warned there may be trouble ahead. But it's not a new crisis, he says, just another chapter of the great deflationary shakeout.

Domestic headlines are upbeat: rising retail sales, strong gains in auto sales, etc. Do you buy it?
There's no question that relative to where the economy was a year ago, things are better. When you consider that in the first quarter last year real GDP collapsed at a 6.5% annual rate, it's an absolute no-brainer that the economy is doing better when benchmarked against that awful period.

But my contention is it's not just year-to-year rates of growth that matter; levels are also very important. Take your comment about rising auto sales. Is a 10 to 12 million annual rate of car sales [based on the latest sales figures] really a good number? In the pre–credit collapse era, the norm was 16 to 17 million cars. The norm in this new, more frugal period in terms of consumer spending is around 12 million, and people think that's a good number because it's above where it was from its lows.

A more important observation on auto sales is that with the annual scrappage rate close to 12.5 million, even a 12 million sales rate doesn't cover that. So on a net basis, we continue to reduce the total stock of autos and light trucks on the highways. Bottom line, we're in a whole new and lower range of auto sales than we were before the crisis.

And housing?
Housing is a sector that is receiving tremendous support from the government — at all levels, whether it's through FHA financing or home-buyer tax credits, or the fact that the Federal Reserve for the first time ever took a trillion dollars of housing loans onto its balance sheet. And yet with all of that, whatever recovery we're seeing in the housing market is extremely feeble. I mean we just came off a month where new home sales were at a record low. When you look at housing starts, take a look at a 50-year chart of housing starts — it's extremely difficult to see any recovery taking place at all. At best we're forming a bottom in housing, and that's after massive government aid.

Well, the stock market has been pretty positive, and it's a leading economic indicator, right?
It's certainly not a leading indicator. It's hard to make a buck on what it tells you about the economy. At the lows the stock market was saying that the economy was falling off a cliff. It certainly weakened, but it never fell off the cliff. Even after the Fed brought the federal funds rate to its microscopic level of almost 0% in December of 2008, the market still had another 25% down leg. 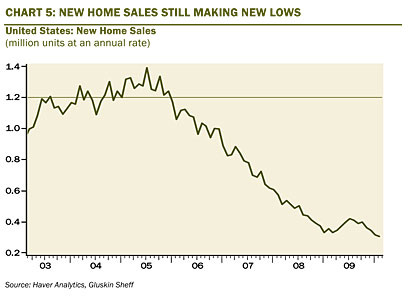 Don't recovering corporate earnings justify the market's recovery?
Most of the recovery in the S&P 500 profit picture has not been in the industrial sector. It's really been in the financials, where profits have skyrocketed. And the question is how did that happen, because we know that they're not making new loans. The banks are certainly not expanding their balance sheets. Their assets are actually in decline. Rather, what has propelled the financials has been their [reduced] loan loss provisioning, which has provided a really powerful bounce to their bottom line.

Remember back when the FASB rule 157 [which requires that investments be "marked to market"] was suspended. To me, that change in the accounting legislation was a very big deal in providing this lift to the financials. Of course, it doesn't mean we get to anything remotely close to [market] price discovery, but that was the tide that lifted the rest of the boats — and it absolutely killed anybody who was shorting the market.

So what do we make of this rally?
We've had this rally on extremely low volume, because nobody is selling and the short sellers continue to get squeezed, and that provides upward pressure on the stock market. There was a period for nearly three or four months where the stock market was actually attractively priced. But that undervaluation went away by the time June rolled around.

As an example for how overextended this market is, the last time the S&P 500 was making a run for 1200 back in 2004, operating earnings were approaching $70 per share. And today the trailing-earnings trend is closer to $60. Anybody participating in this market should understand that it can stay overvalued for an extended period of time, but the laws of mean reversion would suggest that it's not sustainable over the long run.