On a recent Saturday in August, Rahsaan and Michael Thompson were explaining to over a dozen New York state court officers, plus another 15 or so of the Thompsons' friends, the significance of the Bronx softball field where they stood, in a loose huddle near home plate. This was the field, Rahsaan told the audience, where their father took them to shag fly balls. See that basketball court over there? That's where he taught them hoops. On Saturday mornings, he'd went out to the court with his radio — "Playing Al Green songs!" shouted one of Rahsaan's friends — and take jump shots with the boys.

On this perfect summer afternoon, it was also the site of the 10th annual Captain William Harry Thompson Memorial Classic. Every year since Sept. 11, 2001, Rahsaan and Michael have organized a sporting event in memory of their father, a veteran officer in the New York State Unified Court System and an instructor at the court officers' academy. Upon hearing that a second plane had crashed into the World Trade Center, Harry, 51, sprinted a half-mile from the academy's Manhattan location to Ground Zero in order to rescue people from the buildings. Harry's job was to keep order in the court; he didn't have to be a first responder. Harry and two other court officers died as heroes that day.

For eight summers in a row, Michael and Rahsaan, who both played Division 1 college basketball, put together a three-on-three hoops tournament in honor of their father. In 2010 they switched to softball, a more relaxed and collegial affair. And this year, for the 10th anniversary, the brothers invited Harry's former colleagues to the event. 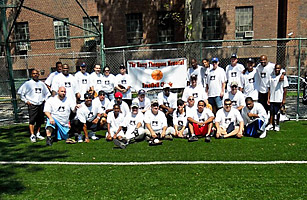 Monsignor Thomas Derivan, pastor of the nearby St. Helena Catholic church who had known the Thompson sons their entire lives, offered a pregame blessing. "I want everybody to know that Harry was not only a great dad to Rahsaan and Michael," said Derivan, "but a great dad to a lot of other people. Everybody was his son. And a lot of these folks here today went to Harry when he was alive for advice, counsel and for help. And I'm sure again, from his place in heaven, he is looking down upon you folks and your children, and offering his help." After a short prayer, one of Harry's former colleagues stepped forward. "We would like to thank you for including us in this memorial service for your father," said senior officer Brian Rafford. "He was the consummate professional, and I remember him fondly. I'm sure he didn't hesitate to go into the towers. He knew people were in trouble. He made the ultimate sacrifice, and I know he'd be proud of us all today, especially his sons."

Everyone applauded. Now, it was time to play ball.

We say it so much that it sounds like a cliché: sports can help heal wounds. But for Rahsaan and Michael, whom I've known since I was 10 years old, and many other relatives of Sept. 11 victims, the simple act of getting together and playing a little ball is a very real way to celebrate a loved one's life. Around the country, countless golf tournaments, basketball games and softball competitions are held every year in honor of 9/11 victims. Some raise money for charitable causes: the Rick Thorpe Memorial Golf Tournament in Wilbraham, Mass., for example, is held to finance two $1,000 high school scholarships in honor of Thorpe, a bond trader who died in the south tower's collapse. Friends of Scott Weingard, an equities trader at Cantor Fitzgerald, head up to Woodstock, N.Y., each September for what's virtually a decathlon: swimming and bike races, basketball and tennis. The Scott Weingard Memorial Fund has endowed scholarships at his alma mater, the University of Michigan, and raised $300,000 for cancer research. Others, like the Harry Thompson Memorial Classic, are just a chance for friends to get together and reflect on life while still having a little fun. "It's a form of therapy," said Michael.

And though I admired Harry, this event made me wish I knew him better. Any father whose sons love him as much Michael, 41, and Rahsaan, 36, loved theirs is a lucky guy. In 1989, Rahsaan and I were teammates on the St. Helena grammar-school basketball team; he was a 6-ft. 2-in. giant who scored 30 points per game. My job was to lob him the ball. After one game, he got autograph requests. Harry loved bragging about that.

And at all of our games, you could hear Harry's booming voice across the court. "Box out!" he'd yell to Rahsaan. "Every day, he looked like it was his first day at military school," said senior court officer Joseph Bianco, a former colleague. "Everything was polished, and his shirts were perfectly pressed." At Harry's memorial service, one of the judges that he had protected said that if King Kong took the stand, he'd feel safe if Harry was in the courtroom. Major Gerard Duffy, a court officer who worked for Harry, once requested a transfer just so that Harry would be his supervisor. Two weeks before 9/11, Duffy and Harry made plans to grab dinner in Little Italy. Harry suggested that Duffy's daughter Kelley, then 13, go along. Few teenage girls ordinarily want to socialize with two middle-aged men, but Kelley jumped at the chance to hang out with Harry. "She loved him," Duffy said. That dinner was the last time she saw him.

During their grieving process, Michael and Rahsaan had to grapple with a complicated emotion — anger at their father. After all, Harry made a fateful choice. By going beyond the call of duty, he left many people behind. "That was hard to come to terms with," said Rahsaan, who after St. Helena went on to play basketball at the University of Maine and is now an assistant coach at a New Jersey high school. "You didn't know what he was thinking. 'What were you thinking? Don't you realize that you had a family that loved and cared for you?' My dad was very strong-willed." Rahsaan laughed. "If we were down there, in his way, he would have told us to get out of his way because he had people to save. He felt like what he needed to do was right. And if he did what he felt was right, then I support him. Even though it wasn't the outcome that me or my brother wanted, we definitely support him."

And now, 10 years later, they celebrated him on the softball field. After the somber pregame ceremony, the 10th annual Harry Thompson turned upbeat. Rahsaan and Michael's friends matched up against the court officers for a doubleheader. (The Thompson team won both games). Michael's son Kyle, who was almost 2 when Harry died, played second base. Rahsaan struck out a half-dozen times — in slow-pitch softball! — and Michael laughed at him the loudest.

When I was growing up, Michael was a role model: a classy guy who earned a basketball scholarship to Drexel University, where he was a star player. During the softball game that August afternoon, I asked him what he was thinking as he looked out on the field at his friends taking cuts against his father's former colleagues. "On a beautiful day like today, I'm certainly thinking of all the different relationships that were developed with one man," said Michael, now a sales executive at Genentech. "And that's what resonates with me every time I come out to see who is at my dad's annual event. It's a platform to commemorate him."

"And what better way to do that than sports?"

Sean Gregory is a staff writer at TIME. Keeping Score, his sports column for TIME.com, appears on Fridays. Find him on Twitter at @seanmgregory. You can also continue the discussion on TIME's Facebook page and on Twitter at @TIME.

See photos of the Twin Towers and the metropolis.
See photos from the 9/11 search-and-rescue operation.